The band's long story started in Cambridge in the 1960s. Former lead singer, spiritual and sartorial guru and best pal Geoff Mott (whose first band, Geoff Mott and the Mottoes, included Roger Waters and Syd Barrett, who went on to form Pink Floyd) played in The Boston Crabs along with Pete Liddle (drums), Jeff Whittaker (percussion), Thom Friedlein (bass), and Thom's big brother, Fred, the founder and lead guitarist.  Sadly, Fred passed away in May 2017, but without his inspiration and initiatives we would not be together today.  The Boston Crabs released three singles on Columbia, including Down In Mexico (available to listen below). Their last gig was around 1972.

In 2001 Geoff (Toots) linked back up with Jeff (Sweet) to form a duo called Toots Sweet, playing around the Sussex coast.  Local bassman Mick Power joined them, with Pete back on board, and then 'Junior' Sean Hamilton (keyboards) was recruited during a holiday in France, followed some time later by Thom (from way back), and guitarist Jean-Pierre, who made everyone else nervous by being a bit too good.

When Geoff passed away in 2013 musical activity ceased, but the band members continued to mutter "What now?", or to put it another way in French "Ensuite ?".

After Geoff's pal Eric (aka Billy "B", see above - please try to follow) joined in on vocals at a memorial event for Geoff this new incarnation was born.  Toots Sweet became EnSuite or On[wards with]Sweet to give us our full name of EnSuite... OnSweet!  Now you understand, hopefully?

In 2017 our good friend and much-travelled guitarist, JP, decided to retire, but we were very happy to welcome the new kid in town, Franck (aka The Italian Job), professor of quantum mechanics, string-theory expert - and guitarist.  Franck has now been joined by our old friend Ham/Ron/Bruce (take your pick, he can explain when you meet him) on guitar and BVs.

And now for the latest sad update - during 2019 Jeff (Sweet), co-founder of the band, was diagnosed with pancreatic cancer.  Despite having had chemotherapy he played three great 45-minute sets at our last gig with him in August (https://youtu.be/lPVg52Hfp1Y), then slipped away from us peacefully in December.  We will sorely miss his inspirational percussion and encouragement but, sensing the inevitable, Jeff said he wanted us to go on, which we will do… 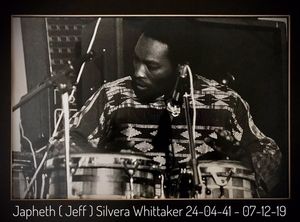